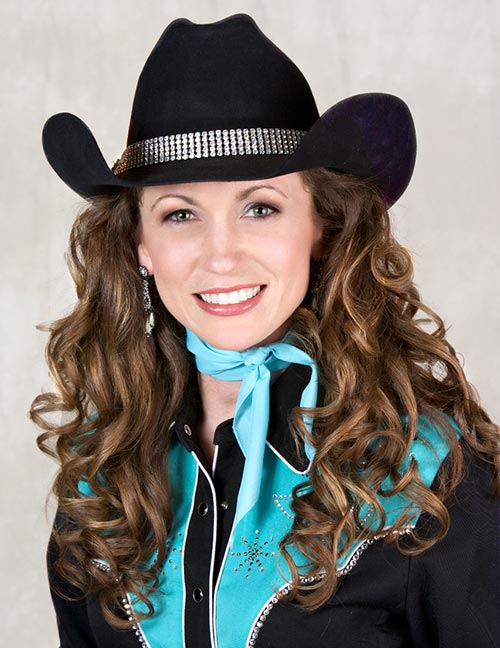 Nicole Carson Bonilla was born and raised in North Hollywood, California and grew up performing in the Carson Family Western Show. The show began in the early 1930’s with Nicole’s Grandfather, Buss Carson, who was a peer to some of the great cowboys like Roy Rogers and Gene Autry. At that time, the Carson Stuntcapade, which consisted of roman riding, trick riding & roping, liberty drill, and dog acts, toured the United States, Mexico, and Canada performing at large fairs and rodeos. Buss Carson also had the honor of riding in the Pasadena Rose Parade on his beautiful Bohlin sterling silver saddle for 35 consecutive years. Nicole’s Father, Merrill Carson, decided to continue the family business and transformed the show into an after-school fundraising extravaganza for elementary schools around Southern California. Nicole started singing in the show at the age of 3. A few years later she began performing with her four sisters and one brother doing trick-roping, can-can, clogging, singing, and a dog act with poodles and dalmations. At the age of 15, Nicole took over the main horse act with her beautiful palomino stallion, Majestic (great-grandson of Roy Rogers’ horse Trigger). The ‘high school’ act showcased various stunts and tricks set to music.

Nicole graduated from Brigham Young University with a bachelors degree in Graphic Design with an emphasis in Advertising. Nicole and her husband, Gabe (who is also a designer from So. Cal.), now own Bonilla Design & Advertising providing graphic design, commercial photography and videography to a wide variety of clients. Nicole also owns Nicole Carson Bonilla Portrait Studio offering high-end contemporary portrait photography.

Close to her home in Gilbert, Arizona is the John Volken Academy Ranch where Nicole serves on the Volunteer Advisory Council. Young men and women between the ages of 18-34 live and work at the Ranch as students in the John Volken Academy for addiction recovery. Nicole is proud to support these courageous young men and women as they are winning their battle with addiction.

Nicole and Gabe moved to Arizona from Orange County, California in 2004. Nicole feels truly blessed to be a member of the Cowgirls Historical Foundation—a group that celebrates the same values, traditions, and heritage that are so dear to her heart and part of her own family’s legacy she hopes to pass on to her six children.